After some very exhausting days on the role play convention cologne 2016 i am back at home working. Before i miss the opportunity to write down my thoughts about the whole convention i will do it now. First of all i want to thank everyone for this convention we had a late start, but with the help of the administration from koelnmesse it was possible for us to attend as exhibitor. And of course thanks to my “team” (brother and girl friend) for the tour and representation on the convention. We were able to spread round about 500 flyers on the convention. This is definitely a success in terms of getting attention. I hoped to receive some more beta sign ups until now, but maybe there will follow some more in the next days. And the convention was quite expensive all included which is a problem at my current state as long as we don’t create any income. But after all i would do it again.

I have had a lot of positive feedback about our presentation and our logo which took a lot of attention from the visitors. There were also some very interesting talks about the game, its setup and monetization. Timbertales will be free to play and will have no pay walls! (I will write another blog post about my whole opinion about payments and stuff so stay tuned)  I also received a lot of ideas and learned a lot about convention presentation or things i would do better or even different on the next convention. For myself i learned that i am not the type of people who loves it to spread flyers and tell everyone what the game is about, but i am a developer so thats my excuse for that one 🙂

Because of the lack of electricity on our stand we only had some wallpapers, sweets and our flyers to present the game to the fair visitors as you can see on the pictures. Next time i definitely would love to present the game to the visitors with a playable version. I think with this approach it is much easier to have a talk or even discussions on going and getting more feedback. But anyhow i am proud that we have had a stand and could generate some attention for our game. For the first time as exhibitor we did our best and received good feedbacks there is nothing more to expect. 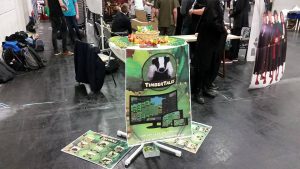 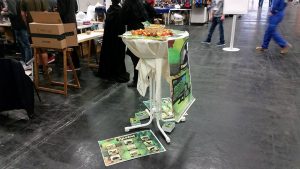 Back to work i have to finish the beta version the next days. I want to start the beta as soon as possible to receive more feedback about my game. I also want to get an idea of the view of the player and of course improve parts of the game until the game can be released. I am a little bit in hurry right now because the money resources will not soon and i have to release something or generate income as freelancer or something, but i absolutely want to release a version which is perfectly tested and improved by feedback from many players. There are also some features missing right now which i want to have finished before the beta starts. There is no need in starting a beta if i know already which parts of the game sucks.

So if you don’t have sign up for the beta now, you should do it here and stay tuned for upcoming news. 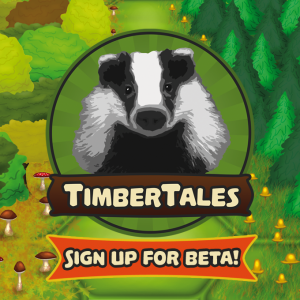