Unreal Engine Day 2 – I made some progress

Hey everyone!
This is Day 2 of “Switching from libGDX to Unreal Engine 4”. Today I made some progress… yeah! But first I just wanted to announce that FlatFatCat is finally available on Steam. This was the reason why I hadn’t any time to make any progress in Unreal Engine4 the last days. Sorry for all daily followers, if something like that exists 🙂 Since it was necessary to fix some bugs in FlatFatCat and port the code to desktop platform. Anyhow today I went back to the topic Unreal Engine 4.

My progress is still very slowly, but at least I made something. First of all I was able to spawn some actors by c++ code. I was really proud. After the weekend, I tried to reload my project … and it was broken somehow. So Unreal Engine got stuck at 71% and loads forever. I couldn’t really understand why. So I had chosen another approach. Since I am not very familiar with the Blueprint stuff and I found a book with the title “Develop games with Blueprints and Unreal Engine 4” I decided to give it a try. After some reading I created a new example project and achieved some basic stuff with Blueprints. This in the end helped me to understand the engine even more. 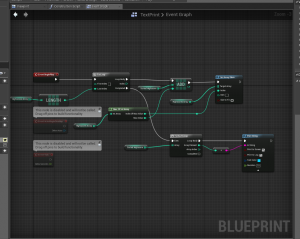 There is still a lot to learn

So I made some progress with Blueprints and understanding the engine a bit more. I still have the problem that the engine is quite heavy on my Macbook 13, but I am so used to develop on OSX that I switched back to it. I will also stick to the books and I have to learn even more about the engine stuff. For now it seems like this will take me at least some more days, before I really can make some good progress. But in the end I think it is worth it, because I have to say of course Unreal Engine 4 looks fantastic and it also helps me to getting more into the c++ development stuff. Last but not least there are actually plenty of jobs for UE4 developer. So I think it is a good decision, even if it has its downsides.

with this blog entry I will finish off my work for today. The entire day productivity was a bit weird, but I will go into more detail. First things first: Today I used my gaming windows PC to develop in UE4 and performance wise it was a good idea. Anyhow it wasn’t that easy to get everything up and running, since I had to install everything again UE4 and Visual Studio. This took quite a while. After that I also installed Blender to get working with some models and try importing etc. 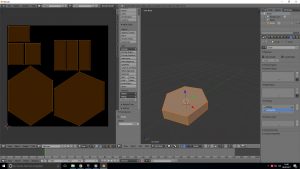 The rough start with unreal

I won’t lie in the beginning and can tell you at this moment I am absolutely lost in UE4 and have no clue what I am actually do. I wanted to start with a simple Board game, so I tried around with building some landscape, getting models into the engine etc. All of this stuff is quite cool and the engine itself looks also very cool. But I haven’t yet written one line of code, which really bothers me as a developer. Everything is so visual and if you are not used to the whole editor it is just overwhelming. I often thought about: Do you really want to stick to UE4? My approach or better said working flow was so much different with libGDX. Most of the time I was writing code. Today, hm, what did I achieve? I watched a lot of tutorial videos, read through many documentations and tried different things to get different things done.

The things getting really fast unreal!

It is very surprising that you can just add a landscape give it a water material, some lights and you have some awesome looking water, but it somehow feels not right to me as a developer. Since I wanted to try out some models and lightmaps, I started with modeling in Blender and just created an easy hexagon for this purpose. Creating the uv for lightmap and exporting the model as fbx was quite simple. Also the import into UE4 works out of the box and there is nothing special to mention about. I was setting up some different cameras and testing around. Everything I actually do is more or less trial and error. Too many things are unclear to me right now and I always have the problem to not know where to solve a problem. For example you can create a whole landscape in UE4 with everything needed or you also can model the landscape in Blender and then import it to UE4. It is somehow confusing to me. Another thing is the blueprint scripting, actually you don’t have to write any line of code, you can just solve everything with the inbuild blueprint scripting.

Of course I will stay focused on UE4 and learn a lot more. I hope, I will get more used to it the longer I try out different things or watch tutorials. For now I feel like an absolute newbie in game development, but I achieved an ingame scene today and want to share that one with you:

Make sure to subscribe or follow my blog, because the series: Switching from libgdx to unreal engine 4 just started!

Getting started with Unreal Engine 4 – Switching from libGDX to UE4

As a small part of my daily work, I want to give blogging actually a bit more focus than I did in the past. So I came up with the idea to write a series about my actual switch to unreal engine 4 and describe the reasons behind it.

Let me tell you something about the history. As some of you might know I already developed and published two games written libGDX: Timbertales and FlatFatCat. I started with the libGDX framework, because I am usually no fan of big bloated engines or toolkits and love to keep things simple. With libGDX I the choice to implement stuff I needed and could write everything by myself, if I wanted to. Most of the time I was actually very happy with libGDX. Meanwhile I am very experienced with it and most tasks are really easy to achieve. Of course there are some downsides. For example implementation of in app purchases using gdx-pay or deploying on iOS could sometimes be pain in the ass. Also the lack of community support is sometimes really nasty. But as I said for me it is a cool framework and I like to work with it.
Unfortunately times change and I definitely have to reach for an other audience within my next game. My gathered experience showed me, that I made the least revenue by now in the mobile market and with in app purchases. The reasons are too few players and the marketing to get more players is quite expensive. I can’t afford that type of marketing, which is needed to make a big hit on the mobile market.
So the strategy changed: I made more revenue with Timbertales on steam sales and Bundles. In addition to that I ported FlatFatCat also to steam, which will be released on steam at the 15th august 2017. With my next game I want to focus even more on steam and maybe enter the console market as well. This is the reason why I couldn’t stick to libGDX anymore, since libGDX doesn’t offer support for consoles in an easy way.

Which engine to use: Unreal Engine 4, Unity, Lumberyard?

With the end of libGDX I had to decide on which engine my future will be build. Important for me is: I have to make money with my games to survive and developing new games actually cost a lot of money. So I need to make a good choice for the future.
I decided against Lumberyard, because it is still in beta and the community is quite small. There are also very few games written on Lumberyard yet. I think it is a very cool engine and if I would develop games in my free time I would at least try it out, but in my actual situation it isn’t a good choice.
So the good old battle Unity vs UE4. I read a lot about both engines and there are so much topics about it. In fact both engines have a big community and both are well supported. They have two different pricing models. While Unity has a subscription model, UE4 takes a royalty fee of 5% if you earn more than 3000$/quarter.
I don’t know exactly why, but I always had a bad opinion against Unity and I dislike C#, if you could write C++ instead. So in the end my decision was to go with Unreal Engine 4. I can write C++, it offers a lot of support and I like the pricing model. I think if I earn money with my games, there is no reason for me not to support a really good engine!

Lets get started: I started with Unreal Engine, created my account, downloaded the engine, installed the engine and started with some exercises from books I bought. The editor looks quite complex and everything is so different compared to writing libGDX. I have a really hard time to get started and get used to an engine approach. But nevertheless I know as a programmer starting is always the hardest part. It is also a step to create a 3D game instead of 2D as I did before. Another downside is my macbook pro 13 has a really hard time with the monster named unreal engine 4 😉 Building times a quite high and I had some crashes as well. A good reason for me to think about using Unreal Engine on my windows gaming PC.
I will try to keep you more informed about my first steps with UE4 this week and provide more details about the development process. Today I just started off the series “My way with Unreal Engine 4”. I hope you enjoy reading 🙂