A short introduction of my new project: Timbertales Puzzle. Currently I am developing a puzzle game based on Timbertales assets. I want to give you a short insight into my current state of development. Let me introduce the game in detail first. You will have to move tiles around in a specific level until your turns for this level are depleted or the level is finished.

To finish a level you need to clear the way for rainy to reach his badger set with limited turns.
To control the tiles you just need to drag them around. It is very intuitive as you know the touch gesture from many other apps or games. There will be also some special mechanics: Tiles, which are blocked and cannot be moved or other obstacles to pass.
The game should contain round about 40 different levels at release and more will follow. The difficulty will of course increase with each level. I plan to offer different level packages, so it will be possible to continuously release updates with new level packages. The development time is scheduled until mid of December. Of course Timbertales puzzle will be released as android and iOS app and will be for free. Some level packages might cost a little fee in future. 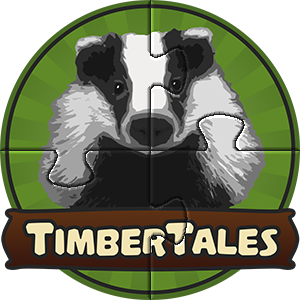